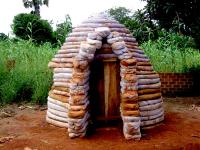 Marcus Simmons has helped people to construct eco-friendly buildings, including ecodomes, in various countries. He wanted to discover if the methods would work equally well in Africa. Dadamac enabled him to try things out. In 2008 Dadamac and its sister organisation Fantsuam Foundation helped Marcus to construct an experimental eco-dome at Attachab. (During the trip, of approximately three weeks, he also did a project on straw bale making, and various visits were arranged for him.)

Marcus and Pamela McLean first met in March 2008. They had initial discussions and then Marcus met the Dadamac UK-Nigeria team through one of its weekly online meetings. Detailed planning was done at a distance during the following months. 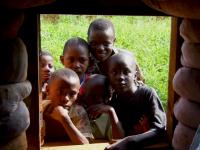 Marcus travelled out to Nigeria with Pam in late September. They arrived in the early morning, with initial preparations for the eco-dome well under way (and for related work he was doing on straw-bale making). Marcus met the people from Dadamac and Fantsuam Foundation who would be working with him. By the afternoon he was in the local timber-yard with his new colleagues discussing what timber he would need to buy for the straw bale maker, and the eco-dome. He had a few days to get things together before the eco-dome construction was due to begin: time to visit the Attachab site and finalise the position for the dome; find out who would be helping him to build it, get all the materials together, and do some visits to other projects in the local area.

On Monday morning Marcus set to work with his team. 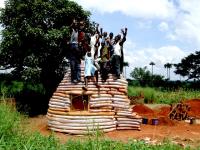 Over the next week they built a small demonstration dome, about the size of a traditional circular hut.

On the Saturday local people came to the Knowledge Resource Centre where Marcus did a power point style presentation (mostly photos) about eco-buildings world wide, and the work he had done at Attachab building the ecodome (and demonstrating straw-bale making for building). His team gave further explanations and answered questions in the local language.

It was on-the-job training, a technology transfer approach, so that any future eco-dome could be built without help from Marcus. In fact less than a year later one of the one of the team (Perry) emailed Marcus to say he had built his own "Perry-dome" (naturally at his own expense) - a remarkable example of genuine technology transfer.

Ecodomes are eco-friendly buildings which are comparatively inexpensive and easy to construct. Normally an ecodome  would be finished off later by being plastered. A smooth plastered finish looks much better and also helps it to shed rain. but the unplastered version shows the construction method more clearly. Most eco-domes have a rounded roof, which saves on material costs, but the local team preferred to build theirs more pointed. Ready for the rainy season a local style thatched roof was added to help the ecodome to shed water (a gift from Dadamac Foundataion).

In 2009 Marcus returned to do some similar work relalated to permaculture, a concept he had started to metion during his visit in 2008, and which people were intersted in exploring further.