The inspiration was the example of the Danone's Social Business in Bangledesh, manufacturing affordable yoghurt for malnourished children. It is described in Muhammad Yunus' book "Creating a World Without Poverty" Social Business and the Future of Capitalism.

Pam had been given copies of the book in London by Chris Macrae, to distribute and promote in Africa. He was encouraging people to set up book clubs to read and discuss the ideas. Pam distributed most of the books, via contacts in Kenya, to people in Kenya, Uganda and Tanzania. Active discussion of the ideas was promoted through discussions in an online "WWP (World Without Poverty) book club". The discussion happened partly through Pam's LearningFromEachOther yahoo group and partly at her "First Thursday" chatroom meetings.

Pam brought more copies to Fantsuam Foundation to encourage people to read, and discuss, the ideas. She and John shared the ideas when people visited. They presented pairs of the books (one to keep and one to share) to people who were interested and in a position to share and implement new ideas. 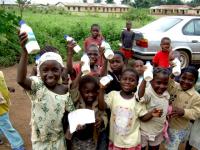 A visitor from the yoghurt factory

An amazing variety of people call in on John at Fantsuam, so there were plenty of discussions about the WWP ideas and the books were widely distributed. One visitor who took books was a friend of John who is involved with a yoghurt company. John emphasised to him the story of Danone yoghurts for malnourished children and the local need for affordable protein.

A few days later one of the yoghurt company's delivery vans drew up, way off its usual route. For a moment we hoped it might be bringing a gift - but it was an enterprising salesman who had heard of our enthusiasm for yoghurt. John could not resist the extravagance of personally buying a fridge-full of yoghurt for the orphans and vulnerable children at his Saturday computer club.  It was a great treat.

The gift of a bull

John  never planned to have a "yoghurt bull"- but he did have experience of keeping cows. His enthusiasm for yoghurt production lead the yoghurt company to present him with a bull, to breed with the local cows, and improve their milk yield. It was a long term strategy, but John takes a long term approach, so when he was offered the bull as a gift he accepted gratefully, despite the challenges it would bring, and the costs of caring for it.

The bull was first housed in the cowsheds at the fish-farm compound in Bayan Loco. Then a shed was been built at Attachab eco-village so he coud be moved there, to meet his "five wives" and their herdsman. 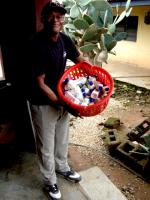 John made various "director's contributions" to support the yoghurt bull . People connected with Dadamac in the UK also made some contributions. Money was most needed to build the shed, to repair the roof when it was blown off in a storm, to feed and care for the bull - and to keep buying the occasional nutritious treat of yoghurt for the children.

Sadly, in June 2009, the bull fell into the River Wonderful, that runs along the boundary of Attachab eco-village. He seemed none the worse for the experience at the time, but died unexpectedly three days later, most probably from internal injuries.

A replacement bull was generously given to John and, as before, the bull was first settled at the fish farm site. Sadly, and for no apparent reason. within a very short time, he also died.

Lack of protein is a considerable problem locally, which is why John is involved in a fish farming project, and other initiatives related to improving nutrition. There is very little dairy produce available, other than evaporated or dried milk. The "yoghurt bull" was part of John's varied long-term attempts to tackle the protein-poverty problem.